As a part of celebrations in the 75th year of independence of ‘Atam Nirbhar Bharat’, IBC jointly with NBCC (I) Ltd. organised a Seminar on “Contribution of Construction Industry in Building of Independent India “, on 30th March 2022 in Jacaranda Hall of India Habitat Centre, Lodhi Road New Delhi. The Seminar was attended by large number of professionals from construction Industry. 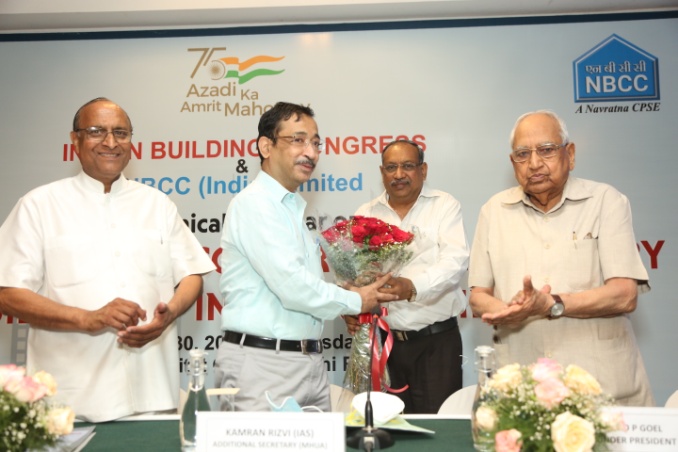 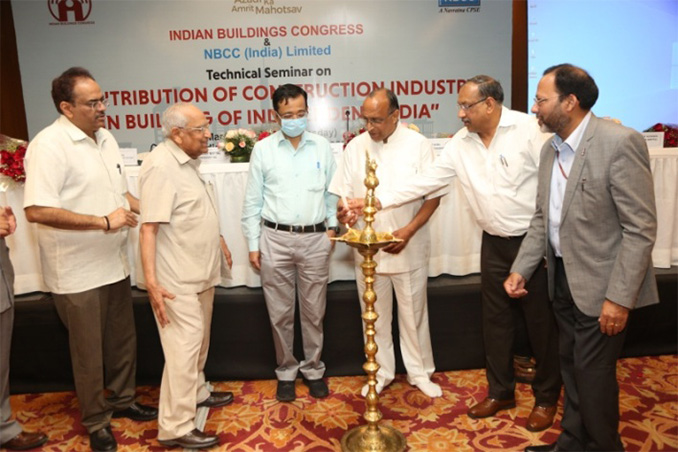 The inaugural function started with lighting of the lamp by the Chief Guest Shri Kamaran Rizvi, Addl. Secy, MOHUA, who was also joined in lighting of lamp by all the dignitaries on the dais. 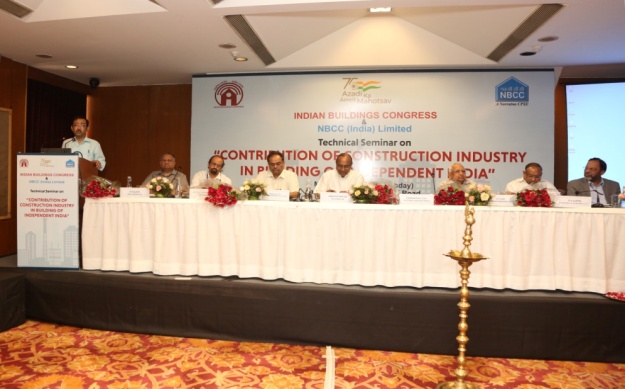 Presidential address was delivered by Shri Pradeep Mittal, President, IBC. The President, IBC welcomed and thanked the Chief Guest for sparing his valuable time for the Seminar from his busy schedule. He also thanked all the dignitaries on the dais; all past presidents; EC & GC Members; and other participants who had come to attend the Seminar.

In his presidential address, the President, Indian Buildings Congress informed that  India has come a long way since independence, leaving behind a long list of landmarks that define its journey from the agony of partition to a strong, powerful and developing Nation. The enormity of development could be gauged from the increase in the total estimated expenditure of Rs. 197.29 crore in first budget of Independent India in 1947 to  an estimated expenditure of Rs. 34.83 lakh crore of Union Govt. and that of state Governments Rs. 49.13 lakh crore during financial year 2021-22 besides the expenditure by  private sector. In its 74 years of independence, it has built a modern economy (second fastest growing economy), remained a democracy, lifted millions out of poverty, has become a space and nuclear power and developed a robust foreign policy. Besides self dependence in foodgrains, india has achieved tremendous progress in its overall development including construction sector in providing housing, water, energy and related infrastructure for the welfare of common man. 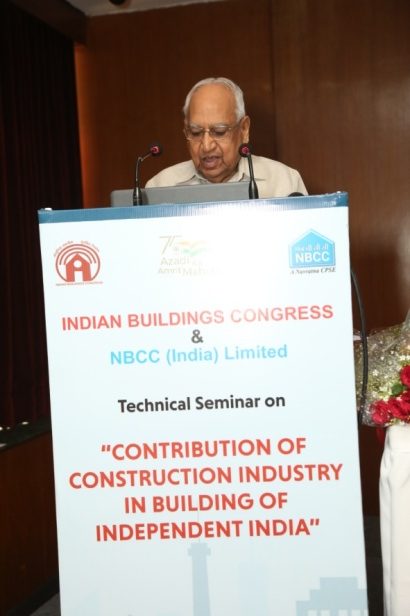 Shri O.P.Goel, Founder President IBC and former DG(W), CPWD, in his address informed about the Journey of IBC since its inception in 1992 and its contribution in the promotion of built environment which is sustainable, affordable, green and energy efficient. 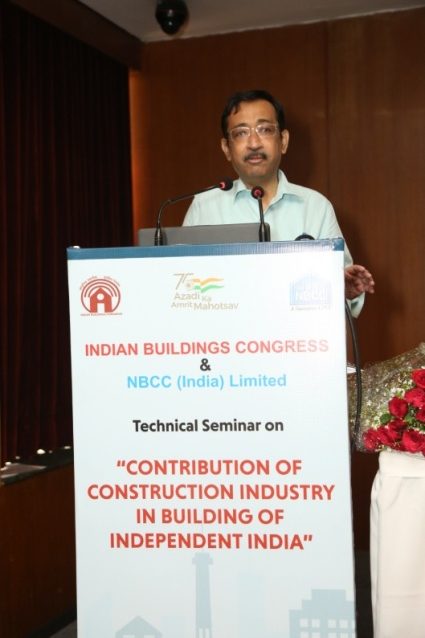 Shri Kamran Rizvi, Addl. Secretary, MOHUA, the Chief Guest of the function, by referring to the Indus valley civilization and the shelter being taken by habitants in basements and bunkers during the present day war between Russsia and Ukraine, in his address, underlined the importance of Civil Engineering being the oldest and mother branch of the Engineering, in development of the Nation. He informed that the real challenge before the Nation is the non-availability of enough skilled manpower including the skilled contractors for implementation of various modern developmental schemes of the Government. For the ‘JAL JIWAN MISSION’ where the Government intends to spend approximately Rs. 3.00 lakh crore so as to reuse 20% of waste water, it is mulling to find out the most appropriate technology for treatment of water and the skilled agencies. For fulfilling the aspirations of people, he also emphasised the need for training of engineers, contractors and the workers in Government as well as Private sector for ensuring Speed, Scale and Safety in construction industry, as the Government alone cannot succeed in its endeavour without the involvement of private sector. He also expressed that IBC can play a vital role in training the manpower and tying up with research institutes on the lines similar to IRC. If suitable proposal containing its action plan in this direction to build modern India, is initiated by IBC, the ministry can look into to consider assisting IBC. 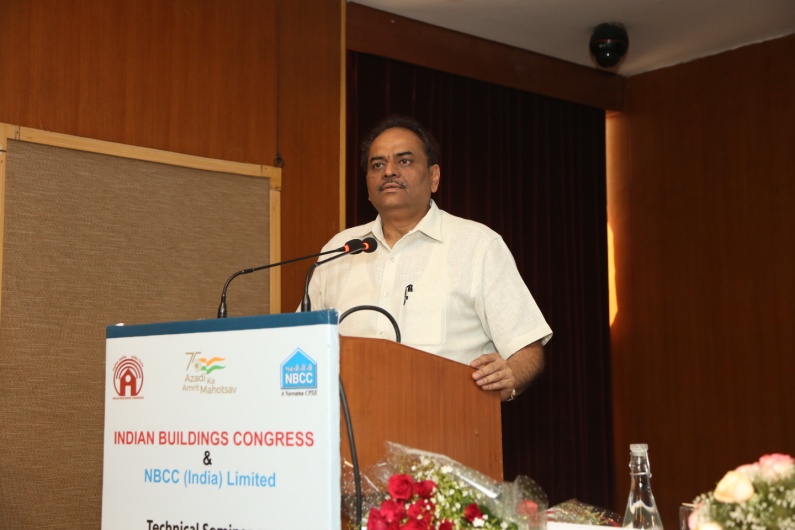 Shri Parimal Rai, IAS (Retd.), Past President, IBC & Former Chief Secretary, Govt. of Goa, in his address while informing that construction is the base of anything and everything, underlined the necessity of introspection to know the adequacy of development and to take the corrective actions for covering the demand and supply gap. He mentioned that Bhakhra Nangal dam was constructed manually as mechanisation had not taken place at that time in construction, but presently, despite lot of mechanisation and availability of everything, still lot is required to be done. He also expressed the need of skilling of the manpower. Every scheme should be formulated and implemented in such a way so that each affected person gets the benefit without differentiating its status, rich or poor, caste or religion. He expressed the need for wide consultation among all the stake holders before implementing any project for getting the intended benefit. He also expressed the IBC to think, how it can contribute positively in skilling of the manpower? 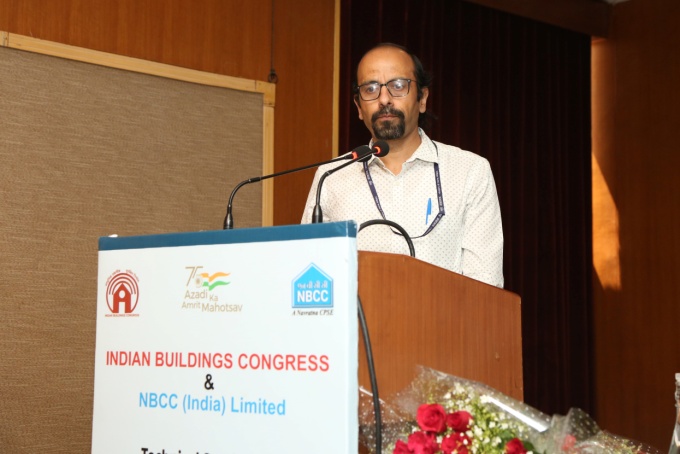 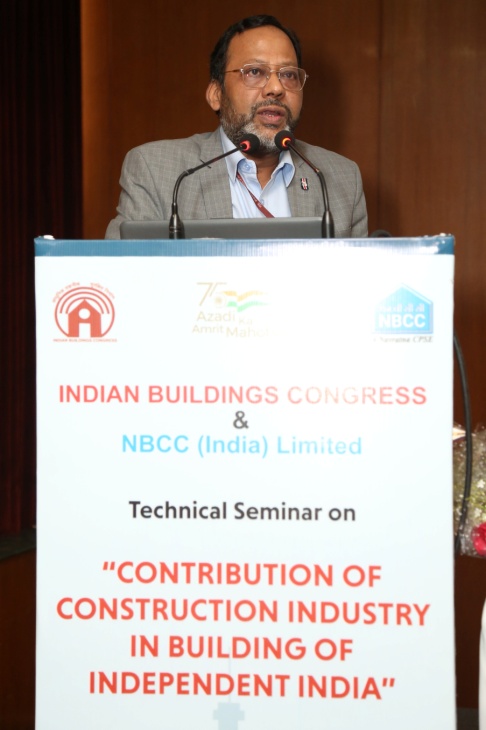 Dr.  Shailesh Kumar Agrawal ED, BMTPC, in his presentation outlined the importance of emerging construction systems and technologies for faster, safer, efficient and affordable construction with least life cycle cost, so as to quickly provide accommodation to the needy persons in urban and rural areas across the country. He while apprising that more than 16 lakhs houses are being constructed using innovative technologies, underlined the importance of 3S i.e Skill, Scale and Speed in construction. He also explained in detail the six emerging technologies recently approved by the Government which are being adopted for construction of 6000 dwelling units (Light Houses), 1000 houses with each technology at 6 different places in the country. These 6 technologies of Light house scheme for construction of 6000 houses are live laboratories for all the stake holders who can visit the site, learn the technology and contribute his/her views, if any, for improvement. 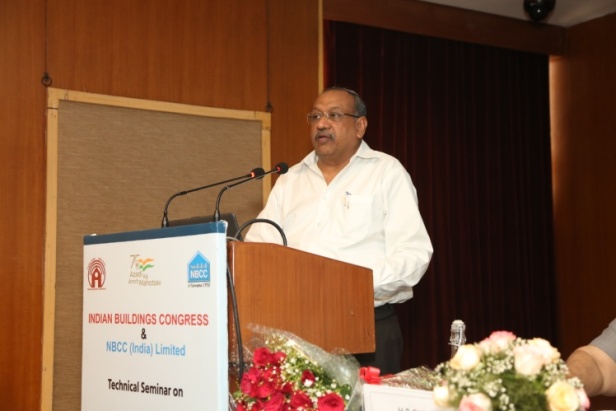 Shri P.K.Gupta, Vice President, IBC and CMD of NBCC (I) Ltd., in his address informed that the modern greener construction materials are substituting the traditional construction materials like, brick, cement, wood and steel etc. and mechanisation is substituting the manual construction activities for enabling faster and quality construction, sustainable in every respect.  He also expressed the need of  training and skilling of workers and adoption of efficient precast technologies with digital integration of all the processes involved in construction for minimising the C&D waste and ensuring faster construction. He suggested the IBC to take up the training and skilling of Architects and Engineers. 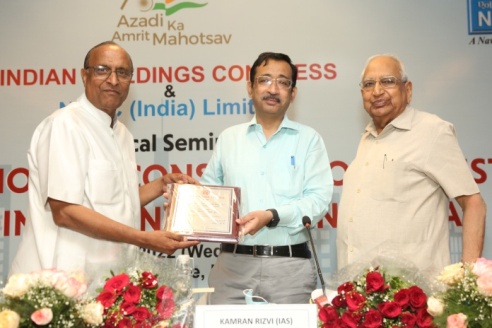 To mark the occasion, the Mementoes were also presented to the Chief Guest and the Speakers. 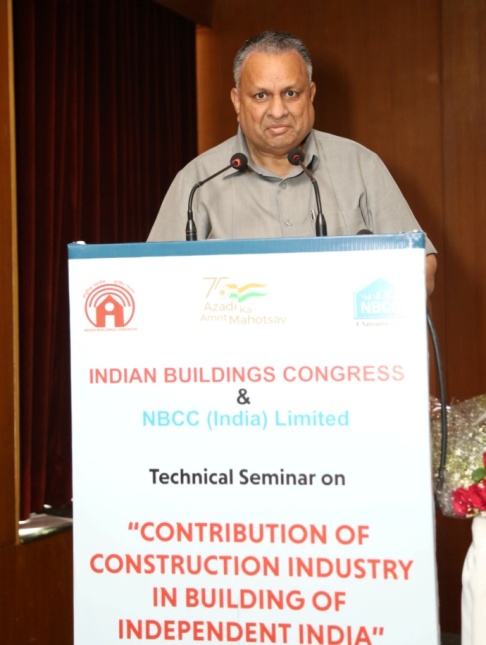 At the end of the seminar, Shri H.P.Gupta,, Honorary Secretary, IBC presented the vote of thanks.